Post Falls has scenic views of surrounding mountains and the expansive Rathdrum Prairie. The Spokane River connects Post Falls with Lake Coeur d’Alene, fully navigable upstream from the Post Falls dam. Post Falls is the western gateway to northern Idaho, intersected by Interstate 90 and just four miles from the Idaho / Washington border. This bustling community is growing and thriving due to a variety of opportunities, both economically and recreationally. Easy access to Spokane also makes Post Falls a popular place to live and play.

Post Falls looks forward to balanced growth and development. By 2000 the population topped 17,247 persons with over 500,000 persons within a thirty-five-mile radius. Post Falls is a pioneer town with a progressive spirit!

Post Falls is located four miles east of the Washington-Idaho border along Interstate 90 in Kootenai County and is bounded by Coeur d’Alene, Idaho to the east, the State of Washington to the west, the Spokane River to the south, and the Rathdrum prairie to the north. Post Falls is 20 miles east of Spokane, Washington, and approximately 100 miles south of the Canadian border. Due to the proximity of numerous lakes, rivers, and mountains, Post Falls, Idaho is an inviting place to live and visit. This fact is reflected in the tourism and retail sectors of the economy, with an increasing number of retail, dining, and entertainment businesses located in the City. Additionally, Post Falls has become a favored retirement community.

Post Falls is named after German immigrant Frederick Post. On June 1, 1871, Frederick Post made a deal with Chief Andrew Seltice, a prominent Coeur d’Alene Indian leader, to obtain more than 200 acres of Spokane River land to start a water-powered lumber mill. The purchase of the land is preserved in a pictograph on a granite cliff in Treaty Rock Park. In 1902, the mill was destroyed by fire; the dam was undamaged. In 1905 the mill was rebuilt and resumed operations. A newly formed Washington Water Power Company purchased Post’s site and began making plans to develop a hydroelectric facility. The new hydro plant at Post Falls would provide power to mines nearly 100 miles away via the longest high-voltage transmission line in the world. The dam and hydro plant is now operated by Avista Utilities and is the site of Falls Park, with observation decks open to the public.

The natural beauty of the surrounding mountains and the river connecting Post Falls with Lake Coeur d’Alene expand the recreation and scenic opportunities. Post Falls has retained the small-town look and values that continue to draw residents and newcomers. Today, the city boasts a steady growth in population just over 35,000. 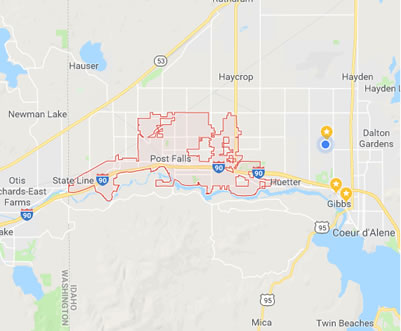